So far, the only information to be released about the Riverside Drive Riverfront Redevelopment Plan has been about the greenway, open space and New Belgium.  All of these sound wonderful but we wanted to point out the other plans the City of Asheville has in store that will inevitably push out the artists and make this your next Biltmore Park.  You can read the entire plan that was adopted in August 2014 here:  Riverside Drive Redevelopment Plan

Just the facts from the Riverside Drive Redevelopment Plan, pages are noted:

Office and Retail Rental Rates to go up, up, up
According to the Alternatives to Gentrification study that was released June 2014, 71 artists were surveyed.  The average rent was $12/square foot.  The median rent was $333.  Artists considered affordable rent to be $6 - $12/sf.  Well, get ready to get kicked out.

Potential Planned Development Options:  If the form based code is along the River as planned, they could and have in the plan:
Total projected NET (after costs) cash flow: $72Million. Click on image below to see enlarged graphic - This graphic is from the Riverside Redevelopment Plan: 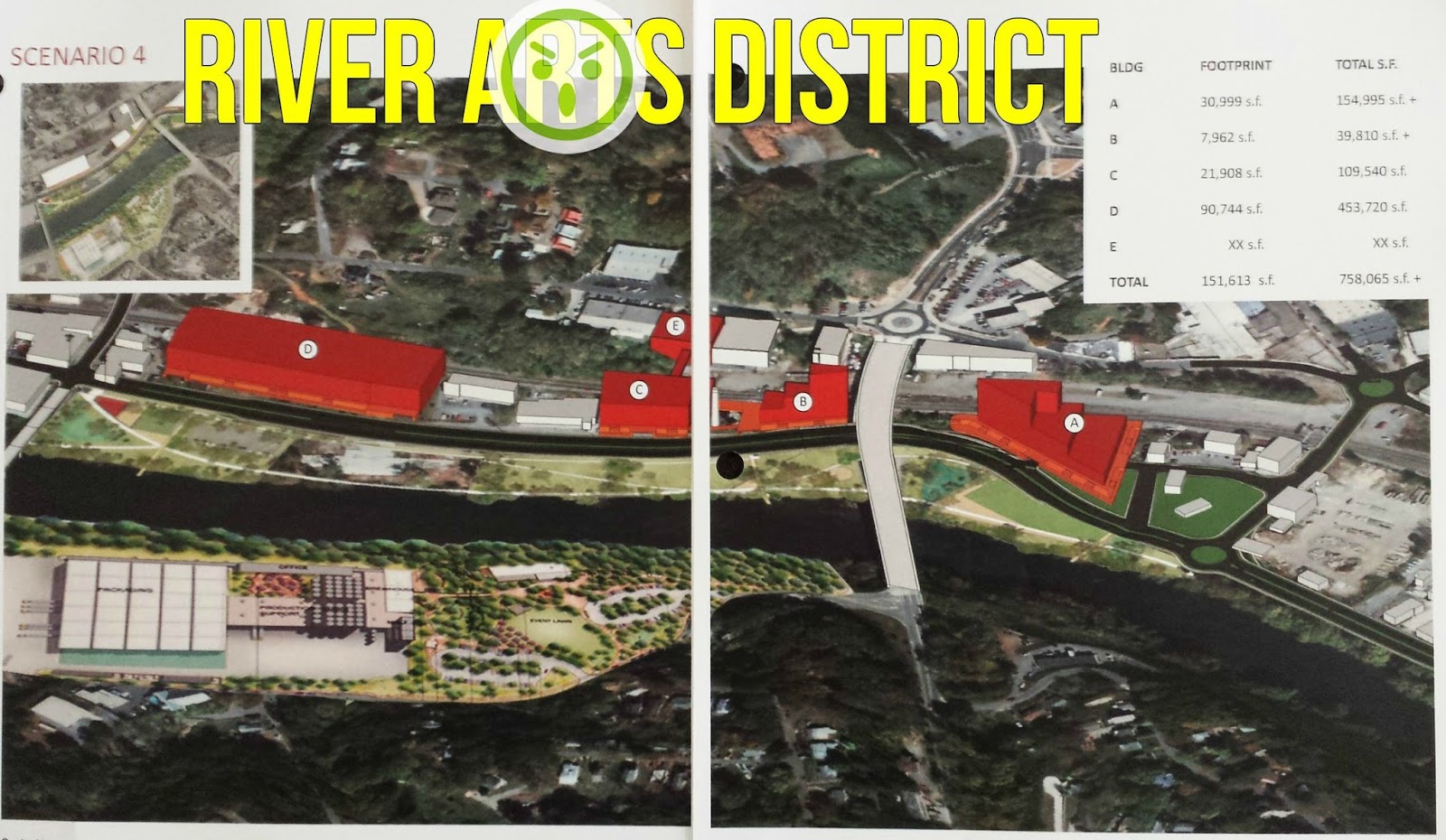 Area D is the planned hotel.

How to get rid of current tenants to make way for this development?
Meet the building code or demolish (pg 34) as suggested in the Plan:


"What if RAD were to become a City/County pilot area in which all buildings and open spaces were either a) brought up to code or b) demolished? This idea has a surprising amount of QUIET support - and it might include provisions for land swaps that would remove uses inappropriate in RAD." (pg. 34)

Wow!  This is already happening because the City received draft findings of this plan well before August 2014 and immediately began work implementing:


"ASHEVILLE – The city on Monday cut the electricity to eight buildings in the River Arts District and requested a disconnection of gas services, said Shannon Tuch, director of development services.

The city cited various code violations and safety concerns for the structures at 339 Old Lyman St. Tenants rent space in the buildings from property owner Robert Camille and run a variety of operations, including a dance studio, art studios and a woodworking shop." (July 14, 2014, Citizen-Times, "City of Asheville shuts down RAD buildings")

Artists were kicked out without notice.

Projected Costs of the Plan (Who pays for the costs?  The city would give incentives as they already have to developers): See pages 69 and 70 of the Plan.
Problems identified in the Plan:

The biggest problem with all this development is the flooding issue.  You can't stop nature.

So, while we are not against development, greenways, open space, etc., we are against the City turning back the hands of time and putting businesses and lives back at risk by recreating a situation that could be disastrous. The City needs to prove that it has put into place preventive measures. If not, who will pay?


"RAD is poised to become the City's and the County's next area for focused revitalization, rehabilitation.... especially given the New Belgium brewery's $135 million investment just across the River." (pg 1)

Related Articles:
Insider Trading? RAD: The Company to Buy and Sell
12 Bones Isn't the Only Property to be Redrawn or Acquired
RAD Lofts Approved by the AARRC