$123 MILLION and Counting: The True Cost of the RADTIP (updated)

Numbers are easy to throw around and they change often. When it comes to government projects and construction, those numbers never go down.  We've been keeping track.  At this time, the true cost of the 2.2 Miles in the River Arts District project known as RADTIP is up to $123 MILLION.  Here's the breakdown: 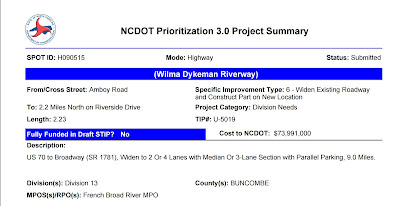 Update: We have been told that this $74 million is for the road work from Amboy Road to the Interstate on Riverside Drive. But from the description in this document, it seems to state it's for Riverside Drive, north for 2.2 miles which is the area we are concerned with. In addition, this document references the same DOT project number as the RADTIP - U-5019. We are providing this information as it comes to us and clarifying details.

$26 Million in Asheville taxpayer funds (from General fund, enterprise fund, stormwater fund, etc.) plus $23.8 million from other funds and grants to go toward: sidewalks, transit shelter, bicycle and pedestrian facilities, renovation of 14 Riverside Drive (the brownfield building beside 12 Bones).   (Click for source)

New costs not figured in the above: an ADDITIONAL $10 more million!


$3 Million new Craven St BridgeThe City is now also planning a new bridge to connect New Belgium to the River Arts District at an estimated cost of $3,000,000 Million. There is a current bridge but it's not suitable for truck traffic. That one will be converted to a pedestrian bridge once the new bridge is up.

$7 Million for Craven St improvements - was originally estimated at $2 Million but the City had to increase it another $5 Million last year. (Click for Source)