New Belgium & City of Asheville: Conflicts of Interest Do Not Apply

In our research we learned that the Economic Development Agreement, part of MOU between New Belgium and the City of Asheville agreed to exclude one particular law: Conflicts of Interest.  Why? Because both the City of Asheville and New Belgium knew that they would be running roughshod over that very law.  In other words, there would be a lot of back scratching which we have written about before (click here and here).  Here is one example in which one of the City Attorneys, yep, your City Attorney, is not only trying to take care of one her bestfriend's friend but also seeking a position for herself with New Belgium.

In this email exchange January 13 and 14, 2015, Jannice Ashley, one of the City of Asheville's attorneys, ask about a position for her bestfriend's friend and gently inquires about New Belgium's hiring of legal staff. Keep in mind, that Jannice Ashley, is one of the attorneys for the City and has been meeting with property owners, including us, about the eminent domain process happening in the River Arts District. Specifically, she met with us about 5 Riverside Drive in which that property will be taken so that a road can run through it to allow for New Belgium's trucks along Riverside Drive. Who do you think she is negotiating for? She clearly doesn't represent the property  owners and will not be fully forthcoming in that information. She clearly wishes to leave the City of Asheville so our guess is, she will be doing everything to grease the wheels for New Belgium. 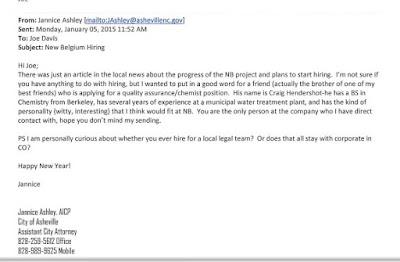 Joe Davis, the New Belgium representative, replies with this: 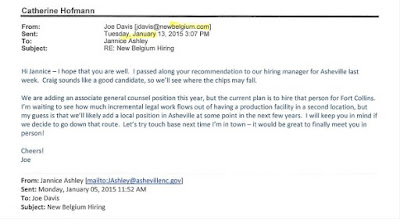 And then Jannice responds with this: 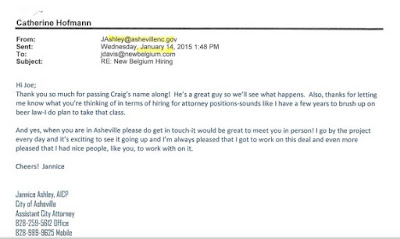 We already saw how conflicts of interest work when it comes to New Belgium. The very same guy hired by the City of Asheville who did the study on alternative truck routes for New Belgium, went to work for New Belgium. He is now their number #1 guy handling the construction.  It looks like everyone wants to get in on the action.  You can read all about that here.