Asheville Stormwater: Down the Drain 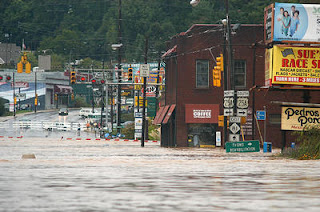 Update: as of the last report, there were something like 38 employees working on Stormwater in Asheville.  Looks like they need another one. Here is a job posting for a Stormwater Supervisor with pay between $54,000 and $65,000 roughly and only have to work 37.5 hours a week!

As part of the upcoming RADTIP road construction, greenways, bike paths and sidewalks planned for the River Arts District, we are finally going to get some drainage... stormwater drainage, that is.

Why is this important? Because we have none, even though the City has been collecting millions each year for this very purpose.

Everyone recalls the great flood of 2004 (and if you don't, click here for details) which wiped out many businesses in Biltmore Village and also flooded the entire banks of the French Broad River and the River Arts District.  There was more damage in Biltmore Village because there were more businesses located there. Nevertheless, we should have learned our lesson and moved quickly to mitigate future flooding or, so you would think. As of today, more than 10 years later, no stormwater drainage has been added to Biltmore Village or the River Arts District and yet the City of Asheville collects millions of dollars each year in stormwater taxes from the taxpaying citizens of Asheville.

You have to wonder why did it take so long and when are they going to fix the problem? Biltmore Village has grown even more and yet, we still wait on stormwater drainage.

Below is a compilation of articles written on the matter, mostly by Roger McCredie at the Tribune Papers.  As the Tribune continues its investigation, we will keep you informed on the matter:

ARTICLES ABOUT STORMWATER FEES IN ASHEVILLE

August 15, 2002
Citizen-Times: The 'rain tax' cometh: be prepared to pay the government for the rain on your roof
Explains what stormwater is, the history of the tax and what other cities like Greensboro do with the tax funds collected


"Storm water runoff is the water that flows off impervious surface areas such as roofs, driveways, parking lots, streets, and other hard surfaces during rainstorms. Rather than being absorbed into the ground, it pours into ditches, culverts, catch basins, and storm sewers."

Tribune tracks down the stormwater fees and where it goes, finding a gap:

"But everything’s relative. Take that same $2.34 and double it; that’s $4.68. That’s the flat rate Asheville residents pay in stormwater fees with each bimonthly water bill cycle. Multiply that by six bimonthly cycles and you get $28.08 a year. Multiply that total by the Asheville Water Department’s total number of customers and you’ll get a total of a little over $3.3 million. That’s the gross amount the city takes in annually, in stormwater revenue.

June 25, 2014: by John Boyle
Citizen-Times Answer Man: More on Bothwell's DWI, Stormwater Fees
The City's budget in 2014 for stormwater fees was $3 million. John Boyle gives his answer as to where those fees go.


As far as salaries, Coates said 28.5 employee positions are funded through the stormwater utility fund, and they perform the duties listed above, with the addition of one customer service representative who handles billing. Of those positions, 21.5 work in Public Works and six in Development Services.


"This year, however, the city announced that it was raising rates because “the City of Asheville has experienced an increase in significant rainfall events,” necessitating “an increase in “stormwater maintenance, engineering analysis and construction improvements.”

January 26, 2016: by Roger McCredie
The Tribune Papers: Where does stormwater tax money go?
City of Asheville announced another increase in stormwater fees. The Tribune follows up its investigation to determine where the funds are going:


"According to the City, it pays not only for repairing and maintaining surfaces and infrastructure impacted by rainwater but for a whole spectrum of services and programs, from street sweeping and drain inspection to “educational outreach” and “floodplain information.”

Summary: A quick dump of 2 to 3 inches of rain in 12 hours caused parts of Asheville to flood. Specifically, the area of Biltmore Village which has been known to flood and was part of the 2004 major flood. The Tribune investigates why stormwater drains have not been put into Biltmore Village, almost 12 years later.

February 16, 2016: by Roger McCredie:
City responds to stormwater query; Tribune files documents request re: feesFollowing up on its February 10th article, the City responds to the Tribune's question as to why no stormwater drainage has been put into Biltmore Village - basically, they're still studying the matter


“The city is partnering with the Corps of Engineers and the Division of Water Resources on a flood mitigation project along the Swannanoa. The goal of this project is to reduce flooding along the Swannanoa Valley and in Biltmore Village. This project is currently in the feasibility stage which identifies the specific project to be considered,” Stomwater Department Manager McCray Coates told the Tribune.


"A 2014 analysis by the Tribune, based on those figures, showed that salaries made up approximately 38% of the stormwater department’s budget."

Email ThisBlogThis!Share to TwitterShare to FacebookShare to Pinterest
Labels: Flooding