City moves forward with development in flood-prone River Arts District
but wants to do it WITHOUT complying with flood standards.

On March 28th the Board of Adjustment for City of Asheville is holding a meeting to consider the following: 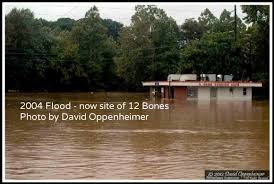 "Stacy Merten, on behalf of the City of Asheville, is requesting a variance to flood regulations in 7-12-1(e)(2)(e)(1)(ii) to allow for the HISTORIC STRUCTURE at 14 Riverside Drive to be renovated WITHOUT FULLY COMPLYING WITH FLOOD PROTECTION STANDARDS." (Picture of notice at the end of this article).

SHOULD THE CITY BE ALLOWED TO NOT FULLY COMPLY WITH FLOOD PROTECTION STANDARDS?

Another example of the hypocrisy of our City.  Private property owners would not be allowed such a variance but the City plans to renovate 14 Riveside Drive (the building next to 12 Bones) as a Visitors Center. The City is also considering renting space to retailers. You would think the retailers would want their products to be safe from flooding...They wish to do so without complying with flood protection standards. This variance would probably not be approved for a private developer or property owner.

Here's an article explaining from Ashevegas. 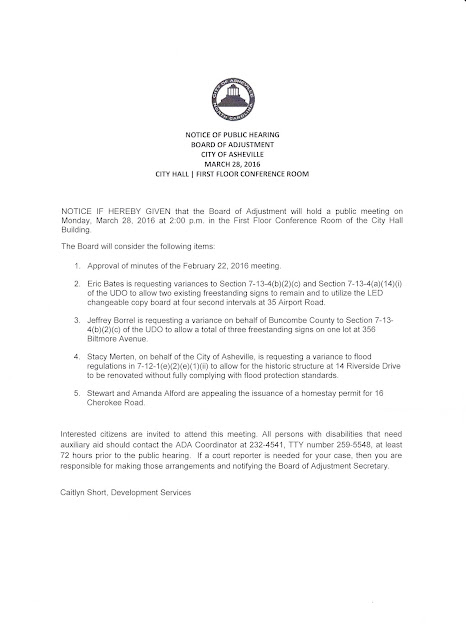 Email ThisBlogThis!Share to TwitterShare to FacebookShare to Pinterest
Labels: Flooding