Asheville Unreported: If they won't cover it, we will. 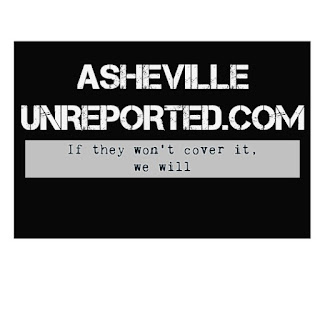 So. We've extended the scope of our research and investigation from the River to the rest of the City and County and launched www.AshevilleUnreported.com.  If they won't cover it, we will. Check it out and sign up.

We learned a lot when we dug into the facts about the River Arts District Transportation Improvement Project, aka RADTIP and also known as Asheville River Boondoggle..

We witnessed the cronyism, conflicts of interest, and misrepresentation of information both by our City and by our local media all in the name of tourism and Big Corporate Beer pandering...

We saw how only property owners that agreed with the City were invited to be interviewed or considered "stakeholders" and how other opposing property owners were not heard...

We witnessed the City's own staff attorney trying to get a job with New Belgium while also working on their agreements with the City and also being involved in the property takings... (article)

But we really learned that this extends far beyond the French Broad River.  This project is costing $25 Million to City Taxpayers - 4 years worth of what our Capital Improvement Budget used to be before this crew came in.

But now, because they've over run their budget, they need more.

The City lied and said it would not increase property taxes this year but a week after passing the budget introduced a $75 Million Bond Referendum that will result in additional $36 MILLION in interest payments alone to taxpayers.  These interest payments must be paid for by increasing property taxes.  You will see a huge increase in your property taxes AT MINIMUM.  If you rent... get ready for a rent increase because landlords will pass these increases on to you. This is on top of other City service rates that were increased - trash, water, stormwater, etc.